Websites for architects (or any design professional) are, well, a lot of work. Imagine a designer trying to interpret the creative ideas of another professional creative person. It’s risky business, to say the least. 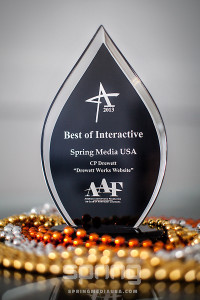 The Drewett Works website was named Best of Interactive at the 2014 NELA Addy Awards.

However, in this case, the final design of the Drewett Works website was the first draft. Let’s just say that there might have been a miracle involved.

After many hours of creative brainstorming, furious writing, gathering of photos, and assembling the parts, the Drewett Works website was launched in December of 2013. The peer feedback was overwhelmingly positive. But there was a bit of waiting with bated breath to see how it measured up against other websites in the annual NELA Addy Awards.

When the envelope was opened and the winners announced, the Drewett Works website was awarded a Gold Addy as well as the top award in the category, Best of Interactive. The website was also a finalist for Best of Show.

We, at Drewett Works, are thankful for the team at Spring Media USA, particularly graphic designer extraordinaire Ryan Lord who spent countless hours researching to find just the right tools to create the perfect website for us. His design talents are tremendous. A round of applause!

For the past four years, Spring Media USA has received multiple awards in the American Advertising Federation (AAF)’s ADDY Awards. Since the company’s inception in 2009, Spring Media has consistently been recognized by the AAF for creative excellence in advertising and graphic design. The company now boasts an impressive 36 awards in its short history.

Spring Media USA was founded by Drewett Works’ partner Elizabeth Drewett, who retired from the company in February of 2014. While no longer involved in the daily operations of the company, her love for the amazing Spring Media team and their fantastic work continues.

To learn more about Spring Media, visit them here.